There are a number of activities going on that you can enjoy during the Midsummer Festival. Among them are two almost full days of live music with the a number of individual artists, groups and choirs. There will be performances by the Scandinavian Dancers and the Vikings in the Viking Village, including songs, games and a real Viking raid – beware of the Norse! At the Midsummer Marketplace, you find over 50 vendors with shopping kiosks with lots of exciting products and crafts.  There will be cultural displays, kids’ activities, a troll forest, carnival games and a vintage Volvo car show by the Volvo Club of B.C.

Pets are not allowed; only Certified Service Dogs welcomed.

The Beagles (Beer Garden, Saturday 8:00 pm) The Beagles are a musical duo that has been performing music together for the past 20 years.  The Beagles are made up of two music teachers, Ken Mason and Ed Sadler. Together they have traveled all over British Columbia covering all types of music from the 50’s to the 2000’s.  Great music that you can dance to and guaranteed fun for all!! 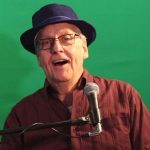 Bo Fred Olsson was born in Sweden and raised in Vancouver.  He has been involved with music and entertaining ever since high school along with acting in film and television following a teaching career.  He has won awards for his stage acting and for original music that he composed for award-winning short plays.

He plays saxophone, guitar, and a high-tech keyboard to accompany his singing.   He continues to perform at various functions around the Lower Mainland and several here at the Scandinavian Community Centre.  Bo’s repertoire includes rock and roll, pop, and country songs from the 50’s, 60’s  and later, with a mixture of songs he loves to perform in Swedish.

The Capilano Brass is a North Shore based brass ensemble. The group has been performing for over 25 years. Their repertoire runs from the Renaissance to the 21st century. They have played for residents in Residential Care Homes, benefit concerts, community events and church services. They are pleased to be returning to the Scandinavian Midsummer Festival.

Cat Toren is a Juno Award winning pianist (with Pugs & Crows), composer and band leader of Cat Toren’s Human Kind as well as in other musical groups. She was raised in North Vancouver and currently based in Brooklyn, New York. She plays regularly at the Vancouver International Jazz Festival and is happy to be returning to the Scandinavian Midsummer Festival. Joining her is Pugs & Crows bassist Russell Sholberg and Tom Wherrett on Guitar. 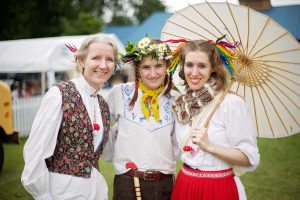 The Knotty Trolls have been making mischief at Midsummer for many years! With their stripey socks, pointy ears, and knotty tails, they’re hard to miss…. And they love food, so watch out for your waffles & sandwiches! You can catch up on their past antics on Instagram@knottytrolls instagram.com/knottytrolls/

The Midsummer Festival is back, and so are the Knotty Trolls! Whether frolicking around the Midsummer Pole, causing trouble at the Wife Carrying contest, or hiding among their friends in the Troll Garden, you can find them by their stripy socks and knotted tails. They’ll be making mischief for the whole weekend, so come say hello – just make sure they don’t steal your waffles! 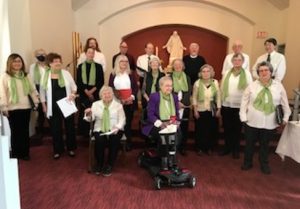 The Midsummer choir brings together the Runeberg Chorus and singers from other Scandinavian groups to Celebrate summer with song.  The Runeberg Chorus was originally founded by Swedish-speaking immigrants from Finland in the 1920’s.  In the beginning the repertoire was mainly Swedish with the inclusion of some Finnish and English songs.  With the addition of singers from other language groups they have expanded their programs to include all the Scandinavian languages, plus English and Japanese. The Runeberg Chorus continues to practice on a regular basis and has recently returned to performing at the Scandinavian Centre and the Danish Church.  Choir Conductor Janet Mowatt has been with the choir for many years and instrumental in keeping the chorus alive. The group is small but dedicated.

The Midsummer Spelmanslag is a group of local musicians who gather each year to share Scandinavian folk music with everyone at the Midsummer Festival. Our greatest joy is to get our audience tapping their toes, or better yet, up and dancing!   http://www.vcn.bc.ca/scandi/ 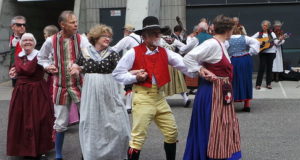 The Scandinavian Dancers of Vancouver is a group of energetic dancers and musicians, going strong since 1971. Though many of us are not Scandinavian, we’re dedicated to the preservation, enjoyment and performance of ethnic dances and music of Denmark, Finland, Iceland, Norway and Sweden. From September to May, we dance on Wednesday evenings at the Scandinavian Centre and welcome both experienced and beginning dancers.   http://www.vcn.bc.ca/scandi/ 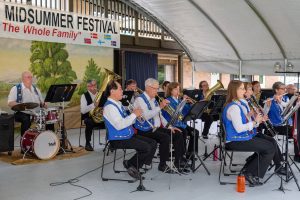 The Vancouver Dorfmusik was founded in 1983 by musicians from the Swiss community who wanted to play music from their homeland. Dorfmusik means Village Band. The band has performed at such venues as the Kitsilano Showboat, Ladner Bandfest, the European Festival and the Swiss National Day. We are happy to be returning to the Scandinavian Festival 2022.  Vancouver Dorfmusik is conducted by Gordon Koch.         http://www.swiss-society.org/vancouver-dorfmusik 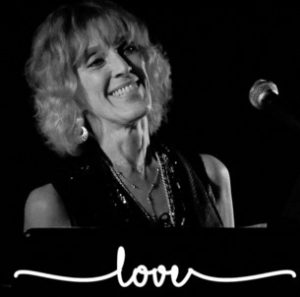 Heather Soles is a Vancouver-based singer and songwriter.  Inspired by the constant wonder of jazz music — how fresh and new and beautiful the songs are each time they’re played — Canadian jazz singer Heather Soles and her band will take you on a musical journey full of depth, heart and swing.  Supported by Vancouver’s top musicians, Heather interprets her expansive repertoire of jazz standards, blues,  bebop and jazzified arrangements of vintage rock with  a natural sophistication and hint of smokiness. A recent project  with Vancouver pianist Miles Black, has been to reinterpret and reharmonize rock songs from the psychedelic 60’s through David Bowie and give each song her own personal flavor. Heather knows it’s all about connecting with the human experience and communicating emotions to the audience  in her soulful, bluesy style. She says “When I sing it’s synergy with the other players.  Music is my life.   Ray Charles said it best…  ‘For me, music is like breathing.  I never get tired of breathing, just like I never get tired of music. ‘ “ 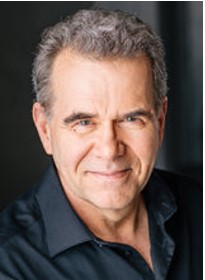 Mike Creber (piano)  CREBER is a Grammy-nominated and Juno Award-winning artist who was dubbed “a cross between Floyd Cramer and Thelonius Monk” by one LA reviewer. As one of the West Coast’s most sought-after musicians, Michael pursues a wide-ranging career as a pianist, film composer, arranger and producer; embracing many genres of music such as jazz, Latin, R&B, rock, pop, musical theatre, country, folk and classical. He has performed as a featured guest with many symphony orchestras across North America and has recorded and toured internationally with k.d. lang, the Irish Rovers, and world-renowned family entertainer, Raffi, as well as Jim Byrnes, Dee Daniels, Valdy, Lee Aaron and David Foster. Michael has released four albums of original music: Brand New Smile, Dancers of the Spheres, Smooth Sailing and Songs For My Baby. www.MichaelCreber.com 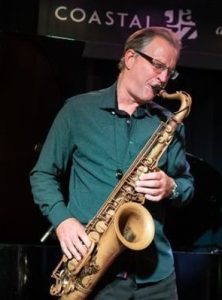 Dave Say (sax)  Vancouver Island-native, jazz saxophonist Dave Say loves jazz and all its variations. He is renowned for his soulful interpretations, powerhouse sound, tasteful inventiveness, and adventurous improvisations. Dave has headlined at every major venue in western Canada, and is a favourite at the Vancouver International Jazz Festival where he presents his contemporary jazz original compositions to a riveted audience each year. Dave’s versatility makes him a first-call musician on the west coast for all styles of jazz, funk, R&B and as part of big bands and larger ensembles. He has performed with Western Canadian Music, Juno and Grammy Award winning musicians  as Dan Brubeck, Brad Turner, Michael Bublé, Dee Daniels, The Supremes, and Oliver Gannon. He swings hard and improvises melodically, conjuring the jazz greats of yesteryear and infusing each note with his own brand of heartfelt emotion. Whether playing straight-ahead swinging standards, or original music, Dave’s dedicated following of fans and musician colleagues certainly have something to say about Say! 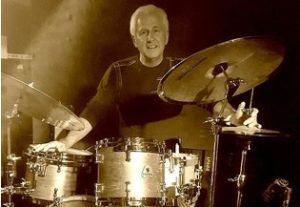 Ray Ayotte (drums)       Ray Ayotte is a drummer, percussionist, drum teacher, and drum maker. He is known world-wide for his drum making and design and has a long history in Vancouver’s drum retail and manufacturing. Ray Ayotte was born in Maillardville Canada where as a youngster he began playing drums for rock bands he formed with schoolmates. Throughout his early playing days Ray made little adjustments to his kit and learned that other players enjoyed the changes and sounds he could make. He dreamed of one day making his own drum set. After working in the music retail business Ray finally had his chance when he created the Ayotte Drum Company. After selling the company he began creating new models for Taye Drums to great success. He now handcrafts RAYA Drums and does restorations and repairs of rare and vintage drums. He enjoys playing many genres of music including Jazz, Rock, Blues and R&B.

V’ni Dansi is a Vancouver-based traditional Métis and contemporary dance company dedicated to sharing the dances, stories and culture of the Métis. Led by Artistic Director Yvonne Chartrand, the company is dedicated to preservation and innovation.

V’ni Dansi holds the distinction of being the only company in Canada to teach and perform both Métis and contemporary dance. Meaning “Come and Dance” in Michif, V’ni Dansi is thrilled to share the Métis people’s joyful culture with audiences of all nations.         https://www.vnidansi.ca/

North Delta-based flute ensemble Fluterrific was created by Michelle Carlisle.  Under her direction, the musical repertoire of Fluterrific ranges from Classical and Baroque to Celtic, spicy Latin tunes, Broadway show tunes and more, with the flute family — piccolos, flutes, alto flutes and bass flutes!   The sound of flutes together is joyous and sweet, powerful and uplifting. Entertaining and fun, Fluterrific is Flute + Terrific!          www.Fluterrific.ca            Facebook.com/Fluterrific               #flutesrock 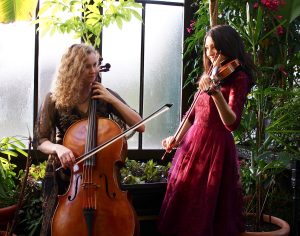 From Canada and the US, Jocelyn Pettit & Ellen Gira are a dynamic fiddle & cello duo. Fusing traditional and contemporary influences, they create powerfully uplifting and soulful music, weaving a rhythmically driving and textured sound. They bring life and fire into original tunes and songs, and high-energy repertoire from Scotland, Ireland, North America, and Scandinavia, with lively step-dancing.

Each accomplished musicians in their own right, with extensive performance history and accolades, Jocelyn & Ellen first joined forces in 2018, in Scotland. Since then, the duo has been gracing stages and captivating audiences in both North America and the UK. They have performed for HRH Prince Charles, been featured in live broadcasts on BBC Radio 3, and will be releasing their debut album, “All It Brings”, in Summer 2022.   http://www.facebook.com/jocelynandellen         http://www.jocelynpettit.com       http://www.ellengira.com 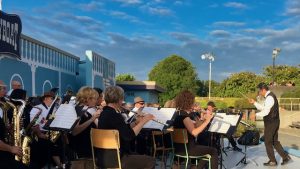 The West Vancouver Concert Band was formed in 1969 as an extension of the West Vancouver Band (youth band). This would be a band for adults to continue their enjoyment playing in a community band. Fiftytwo years later there are two bands. The Pop’s Band and the Concert Band. The Concert Band plays at community events, venues such as the Kitsilano Showboat, Ladner Band Fest and has traveled to the Sunshine Coast, Squamish and Vancouver Island.  The Conductor is Tak Maeda.