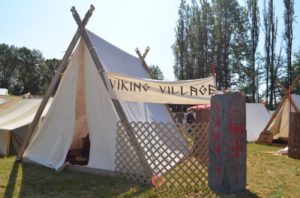 One of the highlights of the Scandinavian Midsummer Festival is the authentic Viking Village that is built and inhabited by Reik Félag, a Norse Culture Recreation Society, for the entire two days of the festival.

Reik Félag take you back in time to the year 1000 AD when you visit the authentic Viking Age Village. Play Old Norse games, learn about Viking trade practices and observe weaving, blacksmithing and how the Viking’s lived during that time. Come and trade and haggle with the traders and be amazed by what things are worth in the Viking world. Be ready for something special and magical in the Viking Village. 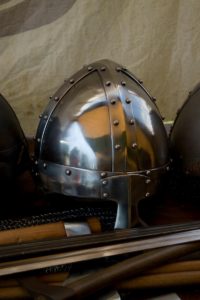 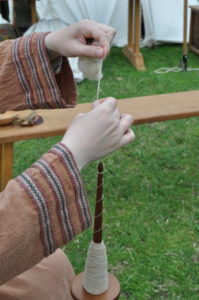 Formed in 2004, Reik Félag, is a dozen member strong living history group focused on the Viking Age. They have all types of members; men, women, and children, which allows them to portray a full range of the Norse culture during the Viking Age, not just the Warriors. By the way, Reik Félag is Icelandic, and roughly translates to “traveling fellowship”.

The group aims to research and educate by attempting to recreate the Viking Age in displays, activities and by creating ‘characters’ that they play in demonstrations (similar to an actor in a play). They are interested in all of the cultures that the Norse interacted with, and how that interaction was not always violent. 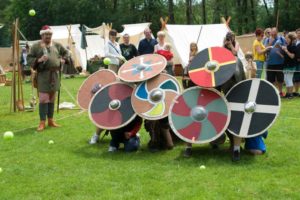 All Weekend Demonstrations: Throughout the entire weekend, the Vikings will have demonstrations in weaving, spinning, card weaving, iron-smithing, woodworking, cooking, trading and rune reading for the kids. In the Warriors Village, the Warriors will be training and doing what warriors do, showing off their warrior skills, weapons, raiding and creating shield walls with the village visitors.

Who were the Vikings?

For 300 years, from the 8th to 11th centuries, the Vikings took the world by storm. In search of land, slaves, gold, and silver, these brave warriors and 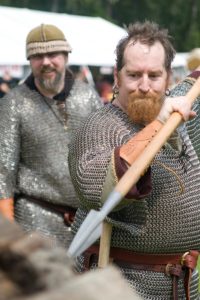 explorers set sail from their homes in Norway, Sweden, and Denmark. They raided all across Europe, voyaged as far as Baghdad, and even reached America. The speed and daring of Viking attacks became legendary. Christian monks wrote with horror about the violent raids on rich monasteries and towns.

But the Vikings were more than wild barbarians from the north. They were shrewd traders, excellent navigators, and superb craftsmen and shipbuilders. They had a rich tradition of story-telling, and lived in a society that was open and democratic for its day.